One dish you can definitely ill afford to miss out when you come to Korea has to be the much acclaimed ginseng chicken! Much has been said about the health benefits of this dish, as it is packed full of nutrients and vitamins in a tiny little pot. This dish is usually made with a whole young chicken, ginseng, chestnuts, wolfberries, jujubes, garlic and glutinous rice. The dish is most popular in the summer as the Koreans believe that eating samgyetang helps to replace lost energy in summer, and that the ginseng also helps with preventing common illnesses.

One of the most popular samgyetang restaurants in the whole of Korea is Tosokchon. Come on any given day and you’ll most likely find a snaking queue just outside the restaurant. For a mere 15,000KRW, you get a pot of piping hot samgyetang together with their homemade kimchi and a shot of ginseng alcohol. As do most ginseng-based food products, Koreans believe that it strongly helps to boost one’s physical stamina.

The kimchi served here at Tosokchon has also quickly gained a reputation among visitors. It is less sour and spicy than most other kimchi that you may find elsewhere, but yet packs a flavourful punch. Most visitors like the kimchi so much, they buy them back at 15,000KRW a kilogram.

We personally loved the 15,000KRW signature samgyetang dish. At only 15,000KRW, it surely is a bang for your buck. There are also other ginseng chicken dishes such as the black chicken with ginseng soup as well as the chicken with wild ginseng soup.

Samgyetang has been voted as the fifth most popular Korean food among nearly 2,000 foreigners, just behind samgyupsal, kimchi, ddeokbokki and bibimbap. Not everyone is a fan of ginseng, but we would say not many dishes can come close to the samgyetang in terms of its nutrition content, as it is not just the ginseng that is contributing to all the nutritional content, but also the ingredients such as chestnuts, wolfberries jujubes and other herbes that are used to make the broth.

Tosokchon is also located to the west of the palace! It is a good idea to include Tosokchon in your itinerary when travelling to the national palace Gyeongbokgung and its surrounding attractions such as Insadong, Samcheongdong, Bukchon Hanok Village as well as Gwanghwamun. As these are the surrounding areas of the national palace, you can find many areas of interest such as the exhibitions dedicated to King Sejong The Great and Admiral Yi Sun-shin at Gwanghwamun, the hanbok(Korean traditional costume) experience house at Bukchon as well as the streets of Insadong, which is near one of the biggest Buddhist temple in Seoul, Jogyesa. Not too bad for an after-meal cultural experience isn’t it?

How to get to Tosokchon Samgyetang: 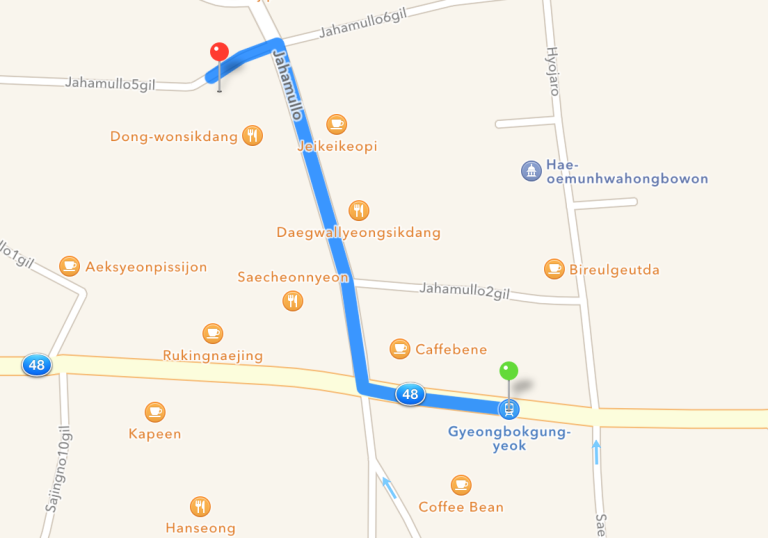 Take the subway to Gyeongbokgung Station on Line 3, and look for Exit 2. After you have climbed up the flight of stairs from Exit 2, walk straight for about 300m until you see a GS25 convenience store near a major intersection. Take the left turn and you would have reached the destination.